Encrypting issues. What formats do I save files in ?

For questions and information regarding GoAnywhere OpenPGP Studio
2 posts Page 1 of 1
Post Reply
Encrypting issues. What formats do I save files in ?

Post by Backspin » Mon Feb 09, 2015 10:09 pm
Quote
Here is what I am doing.. I have 2 separate computers and 2 separate emails and I am trying to send a short notepad encrypted message to one and trying to decrypt it with the other and vise versa. I have successfully decrypted messages with the computer and public key that I am sending to. So I know that computer and public key is good.

So I started up the new computer, downloaded Studio. I loaded the Youtube video and followed the instructions word by word. . First, I created my key pair. Then I went to export it. It says nothing about what file extension to use. It does say .asc in the example so I will go with that i guess ? It says send this file to your trading partners. Do they mean just copy and paste the text in Notepad and send the text ? If so, what file extension to I save it with in notepad ?

Next step is to encrypt a message. So first, I need to make a file with the message in it. The video says nothing about this. So I open Notepad and write " this is a test message" and save it. At this point , does it matter what the file extension is ? I just saved it as whatever notepad saves it as. A txt file i guess. ?

Then I have to get the public key from the other computer/trading partner. I can see the public key on the screen but what do I do with it ? I just copied the key and pasted it in Notepad and then saved it. What extension do I save the trading partners public key with ? Video says nothing. So I just went with whatever the default was. So I highlighted the file and clicked open and it added the key.

Next, I go to the "open pgp tasks" tab, highlight the file i made and hit the encrypt button. Then on the next screen, i clicked on the trading partners public key and added the suffix "pgp" like it says. Then I hit encrypt. And then the screen comes up that says i successfully encrypted a file.

Problem is, when i go and open the decrypted file i just created , it looks like this and not like a normal encrypted message.

When I open these files^ its all just this gibberish. So I sent it anyway and like I thought, it would not decrypt. Then I tried the same process over again a few diffrent times and a few diffrent ways and nothing changes.
Top
Re: Encrypting issues. What formats do I save files in ?

OpenPGP Studio is use to encrypt files for secure exchange with other entities such as trading partners. It is not intended for email message encryption/decryption.

Based on what I gather you are trying to accomplish from your post, I have put together this diagram to show you at a high-level the steps needed to accomplish this test scenario. 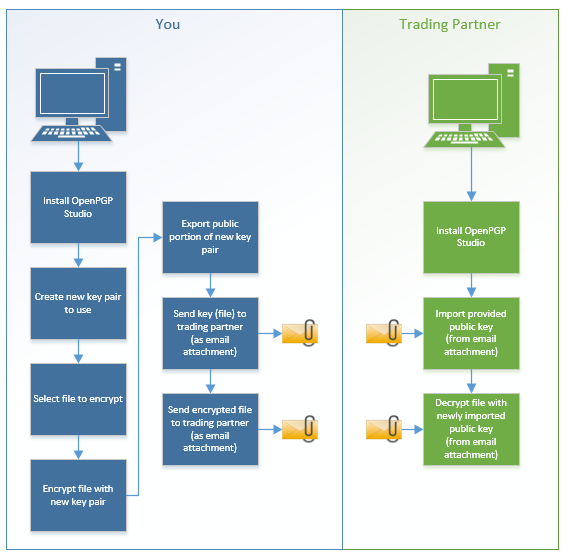